ONE RULE FOR THEM

a game of Pass The Parcel.

You rip each shitty layer;

in the middle’s Barnard Castle.

We tried to keep ourselves at home

regardless of the hassle.

Us common folk, we didn’t know

the way to Barnard Castle.

Now everything is garbled

and it’s down to just one arsehole,

a man who thought he’d take a trip

to check out Barnard Castle.

Consider now the mess we’re in:

the shattered panes of glass’ll

leave a trail of broken shards

that lead to Barnard Castle.

So let them obfuscate the facts;

slip right off their countenance

I am the vicious virus

and I come out when it’s late.

I lurk until the moment’s right

and then I circulate.

I only work at night time

and I’ll bide my time til then.

(Boris Johnson announces that pubs must shut at 10pm due to rising coronavirus cases)
Posted by Joshua Seigal at 04:26

I scaled a mountain

and swam through the sea,

and battled a scree;

I yomped through the forest

and hacked at the vines,

and paused on the way

I hopped on a jet

and I circled the globe,

then got on a rocket

to join a space probe.

But maybe a Durham trip

would have been best:

POEMS FROM THE BEACON SCHOOL, AMERSHAM

Just before the summer break I was lucky enough to run several virtual poetry workshops with the fantastic pupils at The Beacon School, Amersham. With the Year 6 class I focused on memories, and the inevitably mixed emotions that students were likely to be feeling at what was a very strange time. Following Kit Wright's famous lead, I asked each student to imagine that they were in possession of a 'memory box', which they could then fill with their memories of their time at the school. I have found this to be an excellent activity for any students who are in the process of transition. Here is a selection of poems that I am delighted to share, with kind permission from the school. I hope you enjoy them as much as I did!

The smell of salty air on my first holiday

The way the trees near my house sway

The memories of my first friend

The memories of playing a game till the end

Being there on my cats first birthday

The first time I saw my imagination glow

Whilst flying over the sea below

The roar of the crowd on sportsday

And the first time I thought “you shall not pass”

Opening my eyes for the first time

And trying to find a rhyme

For all that its worth

I would put only the most treasured item I have

My box will be,

In the corners will be the secrets of life

And on the lid a constant hint

To the world of what I think

The Memory Box by Faris

The feeling of being a million miles from home

The moment that I had bark chippings thrown in my face

Thinking the older school boys were SO big!

Practicing over and over to tie my school tie correctly

The false smile when posing for the school photos

The noise of the boys playing on the Astro

The musty, sweaty smell of the changing rooms

Hearing the words “You will need to work faster”

The fears I overcame during Year 5 PGL residential trip

Wondering if school would close as COVID19 began to spread

The Box by Toby

The time I got my dog

The time I won the tug of war

The time I had a pool party

The time I wrote this poem

The time I learnt to walk

The time I learnt to swim

The excitement of finding out what was for lunch

The agonizing wait for golden time

The amazing feeling of getting no minutes off golden time

The lonely feeling of going to the nurse

The sadness coming from losing a football match

But amazing friends to always make me laugh

Going to Uganda and meeting some astonishing kids

Imagining what it would be like to live there

The anticipation of going on my first overnight trip

Jumping in a freezing cold river and dismantling boats

Staying up late every night

Learning how to play rugby

Being inspired to start my cricket journey

...and finally, here we have a poem from Edward in Year 4. I asked this year group to think about and to describe a variety of different emotions. Edward decided to perform his video for the camera, and I think you'll agree he did an amazing job! 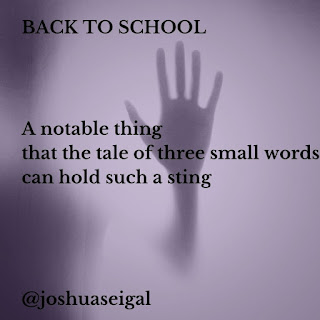 Based on my poem above, I recently set a challenge on Twitter: teachers were invited to write haikus with their classes on the theme of 'back to school'. I am so happy to be able to share the following poems written by Year 5 pupils at Holy Family primary school in Coventry. Thanks so much to their teacher Ms Corr-Wilson for getting in touch!

It is time for school

But mum it is the weekend

The children will learn

We are learning place value

We had so much fun!

When the pens clatter

Welcome back to school

Welcome back to school my friends

Welcome back to school

We do maths, English and art

Our school is so cool

I can’t wait for school!

I am feeling worried today

When is it home time?

I cannot wait to go home

It’s my first day back

I am in school with my friends

During lockdown I have become quite the satirist. With this in mind, I'd like to share two very short poems which relate to the political goings on over the last day or two. The first pertains to Brexit, and Matt Hancock's admission that he would, within certain parameters, be comfortable with breaking international law. You can read the story here.

Only in a very

Next up, I get to grips with the new rule that says people cannot gather in groups that exceed six people. Read about it here.

THE JOY OF SIX

The Rule of Six

But not if you're going

My ventricles are telling you to get lost

The blood running through my veins thinks the T-shirt

you are wearing is crap

My tendons will steal your girlfriend

My stomach lining sends vindictive tweets about you

My prostate gland said your mum is a bitch

Some of my cartilage is mildly racist

My skin nabbed twenty quid from your wallet the other day

and is then sick on your carpet

My fingernails spread rumours about what you did

on holiday in Mykonos

My appendix has been using your Netflix account on the sly

My gallbladder poisoned your cat

My scrotal sac is a total git

But I don’t have a nasty bone in my body.

NEW POEM: 'GIVE ME A BREAK' 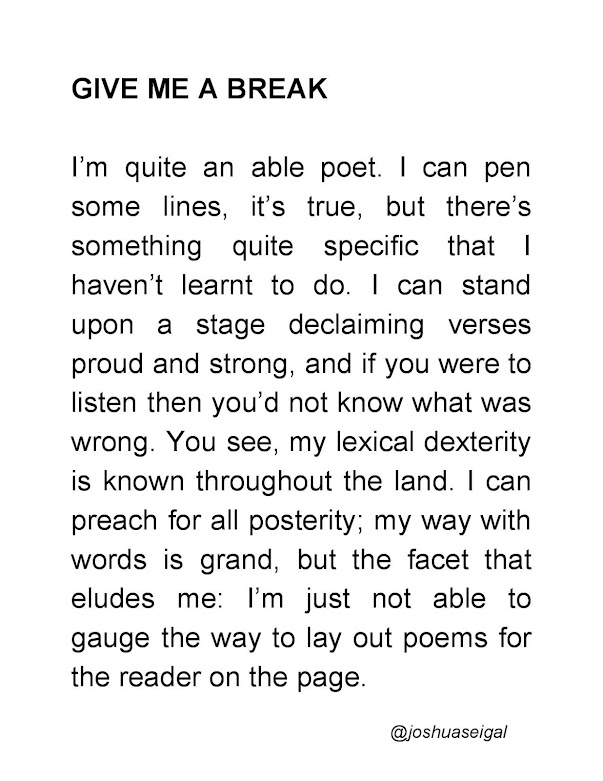 My name is Joshua Seigal, and I am a poet. All of you have heard of me by now, because your class is named after me. To my knowledge, you are the first and only class named after me in the world. (There may be a school in Mongolia or somewhere who have a class called 'Seigal', but I've not been informed about it.)

The first thing for me to do is to tell you how unbelievably proud I am that your class is named after me. For the rest of your lives you are probably going to remember that you were in a class called 'Seigal'. You may think that's a bit weird, but I find it really cool. It means that, whatever you decide to do in your life and wherever you decide to go, you will be carrying a little piece of me with you. I don't mean that literally though; I'm not going to give you a piece of my finger or leg or anything like that. That would be absurd.

I have written a few poetry books (you can Google them if you like) and I spend most of my time visiting schools. Who knows - maybe one day I will get to visit your school. I suppose the next thing for me to do is to tell you a little bit about myself and my journey as a professional poet.

When I was at school I had no idea what I wanted to do as a job. I enjoyed reading and writing, but I didn’t always enjoy reading and writing the kinds of things they made us do at school. I always had quite an active imagination, but I was frequently told I was naughty and uncooperative.

My parents pushed me very hard to get top grades at school, and after a while I became obsessed with getting the best marks in all my tests. After a while, I started to get quite depressed. When I was at university I realised that writing poems was good for my mental health, as it gave me something to concentrate on as well as a way to express my emotions. I enjoyed doing it so much that I eventually decided I wanted to be a poet.

Of course, no one believed that I could be a professional poet. It is not the kind of job that anyone talks about. But I knew I had a passion for words and for performing, and I knew I wanted to work with children and young people in schools. In 2012 I decided that this was what I was going to do.

My journey since then has been very interesting. It has not always been easy, and being a poet is not as well paid as being, say, a footballer. But I feel very lucky to be able to do the job that I do. I am writing to you now to say that there is no such thing as the ‘correct’ thing to do in life. If you have passion and self belief, then you should follow them wherever they lead. You should also read and write the things that you want to read and write; the things that you are interested in. I believe that all reading and writing is good, and there is no right or wrong way to do it. Even if you think you don’t like it at all, I would urge you simply to give it a go. You don’t need to put pressure on yourself.

So have fun, believe in yourself, and keep reading and writing! Oh yes, and also please visit my website, www.joshuaseigal.co.uk.