As the thunder rolls
I remember better times:

Now the cold rain tumbles
and the angry wind howls,

and I lie empty,
remembering. 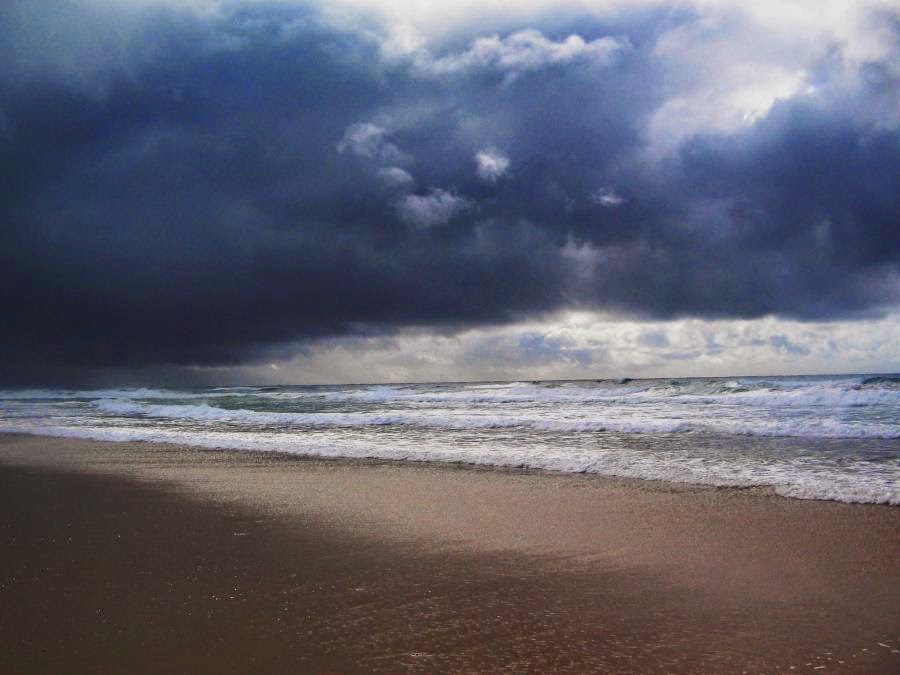 (National Poetry Day is on 2nd October, 2014. The theme is 'Remember'. For lots of fab resources, visit the official website.)
Posted by Joshua Seigal at 07:00

I got this idea from Sarah Perry, a poet and educator who does a lot of work with teens. It is a very fun activity, and can be used either as a warm up, or as a fun, informal session in its own right. It is very, very simple.

Step One
Each student writes down a list of song titles (e.g. 'Blue Suede Shoes', 'Wonderwall', etc). There could be a lightly competitive element with a prize for the longest list.

Here is a poem I compiled as an example:

Song Title Poem (each line is a different song title)

I Believe in a Thing Called Love.
You’ve Lost That Lovin’ Feelin’.
I’m Not The Only One.
Am I Wrong?
Blame It On Me.
All of Me.
My Head Is a Jungle.
I Just Can’t Get You Out of My Head.
Crazy Stupid Love.
She Looks So Perfect.
I See Fire.
I Wish
I Could Be The One.

A couple of months ago I ran a children's workshop with The Poetry Society at the National Portrait Gallery. I had possession of a space in their lovely Victorian Gallery for three whole hours on a Saturday afternoon, so I was challenged to devise an activity that children and families could dip in and out of. I wanted the session to be informal, accessible for all ages, and responding in some way to the portraits and sculptures on display in the gallery.

What I did was this. I cut out lots of speech and thoughts bubbles, and stuck them all along the floor, beneath the artworks. People could then come along, and provide the portraits with 'thoughts' and 'feelings'. I discouraged people from looking up any information about the pictures until after they had done the writing; imagination was key. For some of the little children I acted as a scribe, and conversed with them in order to elicit their ideas.

What emerged at the end of the day was a rather surreal, frequently hilarious poem consisting entirely of lines that children came up with. Here it is. Enjoy!

I’m sad because a bad man was pushing me
Where is the maid with my toilet paper?
I want a new baby
I am asking Father Christmas for a gun to kill bad people
I am bored because I’ve sat here for hours for a portrait
I am sad because I have no cheese
I am sad because I’m thinking of a sad story
Exactly how long is my snooker partner going to leave me waiting?
I’ve had enough! If someone asks me for one more thing...
I want to be an artist.
My beard is long because I grow it.
I want more lions, because I want them in the museum
I want you to hear me roar
I like lions
Lions are my favourite animals. Can you tell?
I’m sad because I’m too fat
I told you the world was round!
Is that Australia?
I wanted a painting of just myself, not with my sisters!
Tick tock tick tock tick tock.
I am serious because I’m thinking of a serious thing


I’m going for ‘the mysterious look’.
Posted by Joshua Seigal at 09:38

MONSTERS - Poem and activity for toddlers/infants


I wrote this poem because I am running some workshops with toddlers. I love to talk and write about monsters, but the monster poem I do with the older children, Ooshus Magooshus, may be a little bit scary for the very little ones. I hope the poem above is tame enough for them, at the same time as being fun and interesting. Here are some monster activity ideas based on the poem above.

Physical
Everyone wanders around the room pretending to be monsters. The supervisor calls out an adjective such as those in the poem - e.g. 'big', 'small', 'shy', 'loud', and everyone needs to pretend to be that kind of monster. They need to imagine what it would be like, do actions and make noises. They could even have percussion instruments to help generate more noise and atmosphere.

Artistic
Just like I've done below, everyone could draw their own monster pictures. They could then think of a word to describe their monsters (to be written down by a helper), and show it to the group. The supervisor could then fit these together to form a poem, to be performed by the group. 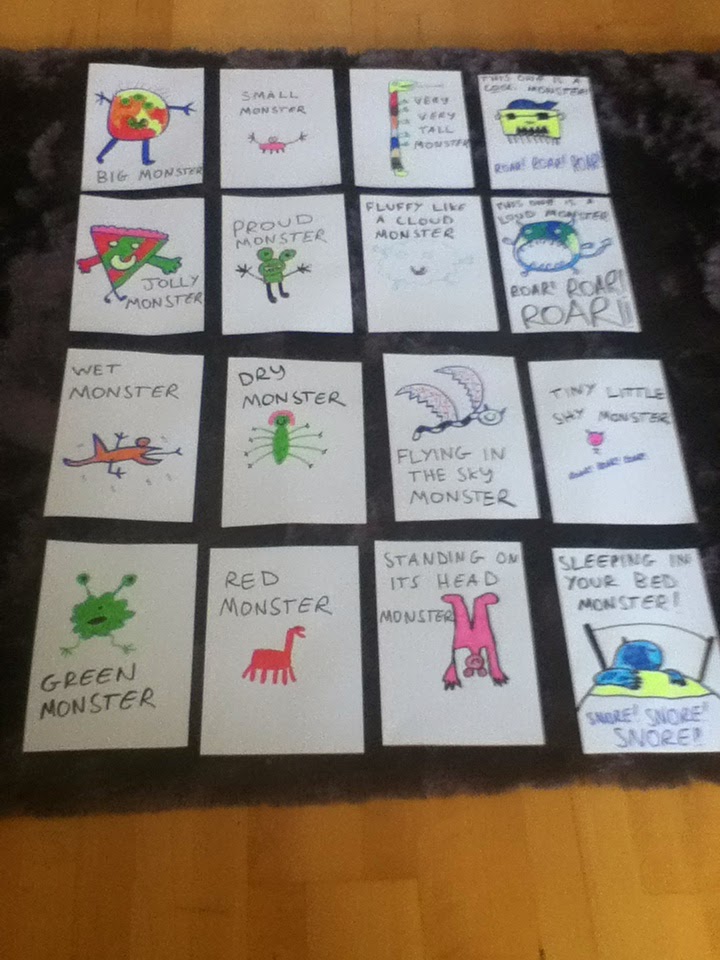 WHAT IF? - Poetry workshop idea for KS2/3 (including a poem about my mum being an invisible sausage!)

Last week I performed at a gig with the poet Paul Lyalls, and we swapped our books. His book contains an interesting little poem called 'What If', which consists of a series of bizarre and surreal questions. Here is an extract from the poem:


What if a teacher was afraid of knowledge?
What if my mum was an invisible sausage?
What if people were born old and grew younger
and younger until they finished up as little babies?
What if a book didn’t have pages?
What if you could make time moving slow or fast,
make the bad times go quick
and the good times last?
What if no one ever dies?
What if you had fried eggs for eyes?

It struck me that this poem could form the basis for a workshop based on the imagination.

Present pupils with a copy of Paul Lyalls' poem. Have a discussion about which are the strangest/most interesting ideas.

Pupils write their own list of 'What If?' questions. Each pupil should aim for at least five. Prizes could be given for the person who writes the most, and the person who comes up the with most interesting/funniest idea.

The teacher collects in all the poems (for that is what they are!), and redistributes them, so that each pupil has someone else's list. They then have to choose a 'what if' question from the list, and write a poem 'answering' it. Some things to think about may be: What would you think? What would people say? What would the world be like? Can you describe a specific situation?

Here is my own poem, answering one of the questions on Paul Lyalls' list above. This can be presented to pupils as a 'model' for their own pieces. By the end of the workshop, each child will have produced two poems!

My mum and dad step up to my teacher
and my dad shakes her hand.
“May I introduce my wife”, he announces.
The teacher looks confused as my dad
gestures at the empty space beside him.
“It’s OK”, my dad says to the teacher,
“she’s a sausage.”
The teacher gasps.
“But I c can’t s see a s s sausage”, she stammers.
“Ah”, my dad says, “that’s because
she’s an invisible sausage!”
The teacher asks:
“Do you mean to tell me that Joshua’s mother
is an INVISIBLE SAUSAGE?”
“Yes”, my dad says.
“Ah”, says the teacher, “I guess
that explains a lot.”
“It sure does”, says my dad,
as he gives my mum a great big kiss.
(Or was it a bite?)
Posted by Joshua Seigal at 06:29

Poems such as this present many opportunities for combining wordplay with physical movement. Start by reading the poem through a few times, getting the children to perform the actions are their familiarity with the poem grows. They can then come up with their own lines to form a group piece, which can also be performed with actions.

The teacher could write down the lines on the board with the class, which the whole class could then perform together. Or children could break off into small groups to devise and perform their own 'dance poems'. Children could use instruments to drum out a rhythm. The possibilities are endless...

List poems are the easiest type of poem to write, and websites like Buzzfeed have rendered itemized lists a part of children's cultural repertoires. A fun, simple workshop idea involves writing wacky, imaginative lists. Inspired by Brian Moses' poem 'Reasons Why I Don't Play Air Guitar Anymore', published in his book A Cat Called Elvis, I wrote my own silly list poem:


Ten Reasons Why I Shouldn’t Go to Bed

The list could either be silly, like mine and Brian's, or it could be a bit more serious, like this one from poet Dean Atta. This will depend on the age of the children and the aims of the workshop. It could even be a really, really weird list poem, like this one by A. F. Harrold, entitled 'Cats are Better Than Fish':