I love it when teachers get in touch to share their students' work! Recently, the fantastic Year 6 teacher at Great Paxton Primary School in Cambridgeshire to got in touch, to say her class had been working on poems inspired by my piece Just a Book. She writes: "I am the Year 6 class teacher at Great Paxton Primary School in Cambridgeshire. Recently, the children in my class have studied your poem “Just a Book”. Our topic has been world war 2 and they have created some poems based on Just a Book, however theirs were called Never Just a War. I have included some images of some of their efforts as they were VERY keen for you to see what they have been up to."
Nothing gives me greater pleasure than sharing, on my blog, a selection of their wonderful poetry! 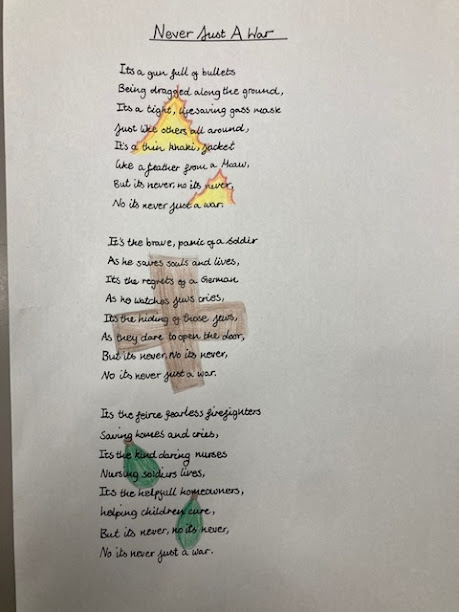 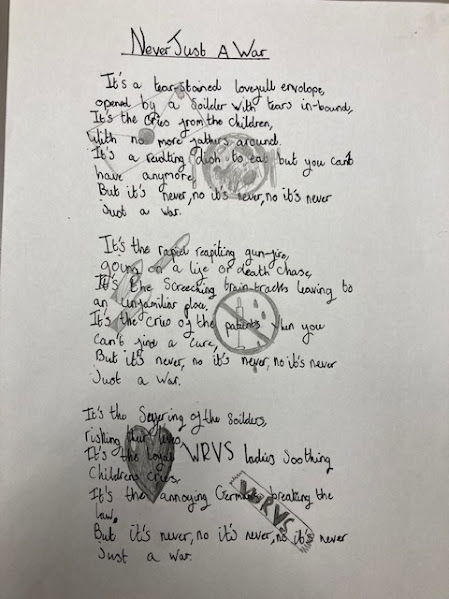 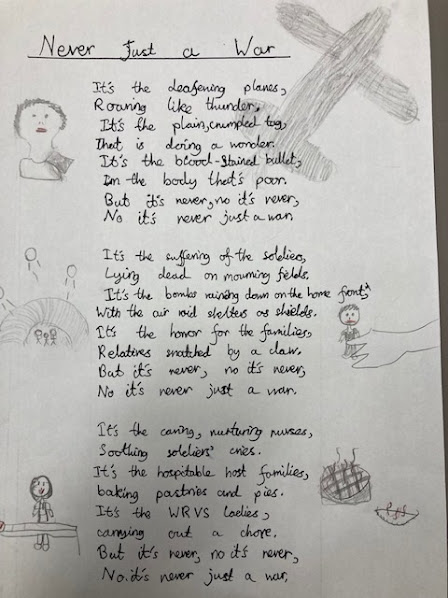 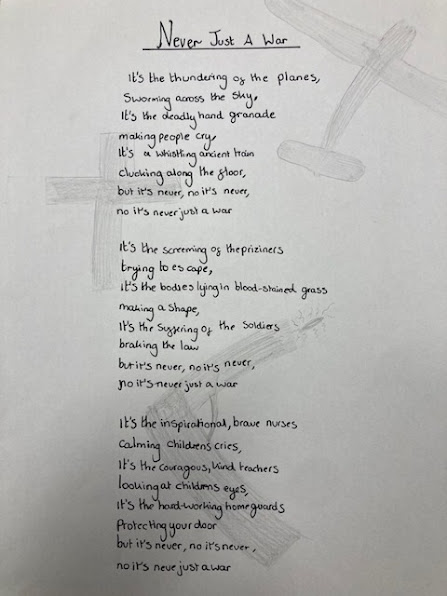 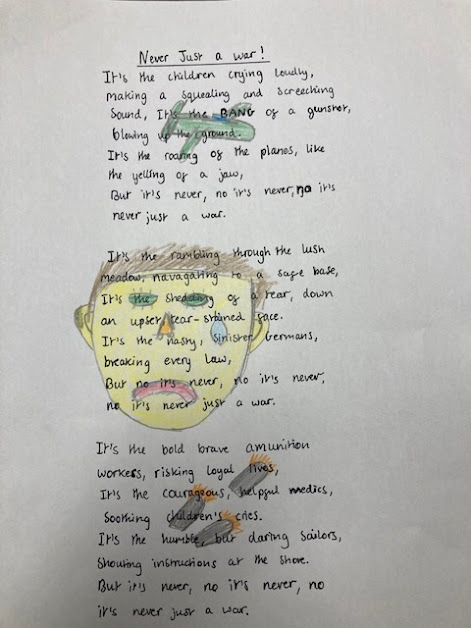 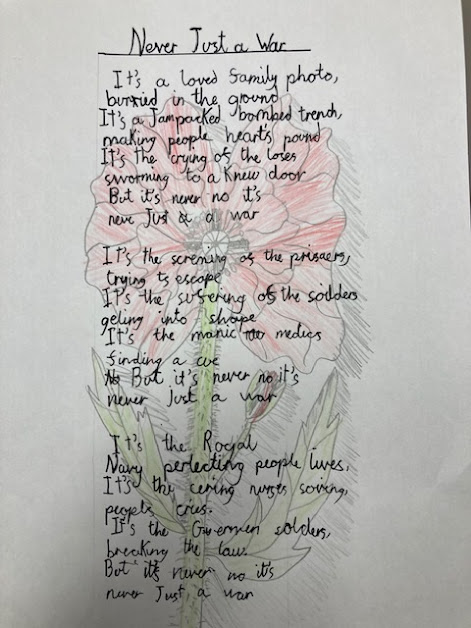 THE BALLAD OF NADHIM ZAHAWI

There was a bald man named Nadhim

Whose wallet was full to the brim.

He craved more of the stuff

But his taxes were looking quite grim.

“I know of a place in Gibraltar”

He uttered with never a falter.

He hoarded his cash

In a big hidden stash

As he bowed down at capital’s altar.

The taxman, he came and said “Oi!

I think that I know of your ploy!

You owe us a lot

So fork out what you’ve got –

We know that you’ve been a bad boy!”

But of wrongs he was quite unaware.

So stop your objections.”

He opened his purse and said “There!”

So Zahawi will doubtless go free.

He’s posh and important you see.

The things that he does

He is different to you and to me. [important Tory Nadhim Zahawi plays fast and loose with his tax and there's nothing you or anyone else can do about it, OK?]

You can decorate the walls

and you can plump up the settee;

you can go into the yard

and cultivate an apple tree;

You can polish all the china;

you can lay a welcome mat,

but a home is not a home

without an itty kitty cat.

You can have a massive telly

and hang pictures left and right;

put keepsakes on the mantelpiece

you can hammer in a nail

for a place to hang your hat,

but a home is not a home

without an itty kitty cat.

You can get a fancy mansion

in a beautiful location;

with no semblance of privation;

you can buy a barge, or caravan,

but here’s the caveat;

a home is not a home

(And a kitty can live

but will always prefer

Emma, a teacher at Markeaton Primary School, has been in touch to share with me some poems written by her pupils. I had a lovely visit to the school last term, and am really pleased that my visit seems to have inspired some wonderful writing! Here is a pair of poems, written by Maya and Mollie:
Open Wide by Maya
Imagine if swallowing were real.
My hair would become big beautiful tresses of broccoli,
Booming on a guitar amp.
My fingers would be famously fantastic french fries,
Speaking like a ghost pipes.
My eyes would be super circles of pepperoni -
Spicy chilli hot sauce.
My toes would be the warming feeling of socks in a dryer
That is found in warm pie and custard.
Lonely by Mollie
I am a deserted island and no one can hear my cries.
I am a barren iceberg floating silently in the vast ocean.
I am a small child living on the street -
All my friends have run away.
I am a king or queen with no one to rule.
With no one beside of me.
I am a glum shadow with no one to own me.
I am lonely.
Posted by Joshua Seigal at 01:44

Some Thoughts on Marriage and Compatibility

Compatibility is not the basis for a good marriage. It is what arises from a good marriage. We create compatility; it does not create us. Indeed, Perhaps the only point of compatibility necessary at the outset of a successful marriage is the mutual willingness to create the compatibility that will go on to sustain it. Any ostensible points of ‘incompatibility’ can in this way be overcome. We therefore need not look at what we want in a partner, so much as what we want of ourselves. As Harville Hendrix notes, “[i}n an unconscious marriage, you believe the way to have a good marriage is to pick the right partner. In a conscious marriage, you realise you have to be the right partner.” Picking a partner purely on the basis of a ‘checklist’ of attributes forecloses our own ability to adapt and develop, so let’s approach things from the other direction: recognising and cultivating this very ability in ourselves enables us to expand our checklists almost infinitely, and thus opens the space for our selves and our partnerships to grow and flourish in ways that we never could have imagined.
Posted by Joshua Seigal at 04:37

This is a poem about a tree.

It’s about a tree in winter,

with all its branches bereft of leaves.

The tree represents the poet’s family

and the fact the leaves are gone

represents the fact the poet’s family

In the poem, the poet

is standing and looking at the tree

from a distance. That distance

the poet feels from his family.

The sky overhead is dark

which represents the poet’s mood.

But! A dove comes to perch

on one of the branches! The dove,

The poet is at peace.

Or the poet’s family.

(See how ambiguity is key!)

which of course represents

the disordered state of the poet’s mind.

You have thirty minutes.

So I had that dream again,

the one where you’re not there.

You’ve called the wedding off, or perhaps

it was never on to start with. Either way

I’m staring at the ring on my finger

and choking on your absence.

I’m looking you up online and when

I find out you’ve got another partner

I want to puke. Or perhaps we’re at

a party or something, but all I can see

is the back of your head and the way

you’ve pinned your hair, the way

you know I love. Then I heave so hard

I wake myself up. Morning begins

to brush the room, and the heap beside me

is you. And please believe me what I say

I’m thankful for it all – those whispers

in my ear telling me what I have,

what I hold, and what I stand to lose.

And So I Write