When I run poetry workshops, I often liken the process of writing a poem to that of baking a cake. This analogy helps even the least experienced writers realise that, with the right steps laid out, it is something they can do. I also think it provides a very useful structure for any poet who is thinking of running workshops themselves. Regardless of the 'theme' of the workshop, I think the following process, or set of steps, can prove extremely useful.

Before thinking of poetry or poems specifically, it is useful to gather together a set of ideas that may, at a later time in the workshop, find themselves part of the poem. How this is done could vary, but things like spider diagrams are very useful at this point. This can be done with any theme, but for the sake of this exposition let's use the theme of 'the ocean', which I recently used when working with a school for their 'Environment Week'. First of all you might model a spider diagram on the board, using the students' ideas, then everyone has a go at doing it themselves. The idea for this step is to be as unfiltered as possible, and to think as widely as one can, drawing out all different kinds of perhaps weird and wonderful associations. Other possible ideas for Step 1 might involve playing word games; the basic idea is for each workshop participant to have their page filled up with a 'bank' of ideas (ingredients) which may (or may not) get put to future use. The important thing is that this is done before writing the poem itself; after all, you can't make a cake without getting the ingredients first!

As with cooking, it is also very hard to write without some kind of recipe. This is why they say that, in order to be a good writer, one also has to be a reader: without reading voraciously and widely, it is very hard to orient oneself, and to work out what it is that one is doing. Thus, after having encouraged students to gather together their ingredients, I like to present them with numerous ideas for how they might shape' the ideas into a poem. This usually takes the form of reading some poems (ideally more than one) together. These could be poems you have written yourself, or poems by other poets, or both. The purpose of this is to provide inspiration, and to expose students to the diversity of ways their proverbial cat might be skinned. What they now have, as well as their bank of ideas, is an appreciation for the various configurations for how they might fit together to form a poem.

Students now have ideas, and some possible recipes. The idea is not to slavishly follow any one of these recipes (very young children might like to closely follow a scaffolded structure, but older pupils should be given more autonomy); rather, the purpose is to use the recipes as inspiration. I always say that, as a poet, I use other poets' work as just this kind of inspiration, and now the students have the same opportunity. Let's get cooking!

A related metaphor is that of the bonfire. Just as we started above with gathering a load of ingredients, we start here with gathering lots of firewood (i.e. ideas, which may or may not end up in the poem). The next step involves finding a 'match' to set those ideas alight. Unlike the 'recipes' above, this might be as simple as providing workshop participants with a short prompt, which will hopefully give them a spark to set their ideas alight. Take my idea above of 'the ocean': after each student gathered their firewood, the spark of an idea I gave them was to write from the perspective of the ocean (using the phrase "I am the ocean" as a starting point). Simple as that. But many students, armed now with their wood and their match, took the idea in some really interesting directions: their poems burned brightly. Personification, or altering perspectives, tends to work really well as a match.

So there you have it: two very simple metaphors for how to run engaging, exciting and meaningful poetry workshops, on absolutely any theme you care to imagine.
Posted by Joshua Seigal at 07:42

POEMS ABOUT 'GROWING UP' BY YEAR 6 - JAMES ALLEYN"S PREP

I recently worked with Year 6 at James Alleyn's Prep School, and am delighted to be able to share the following fantastic poems on the very pertinent theme of 'growing up'. 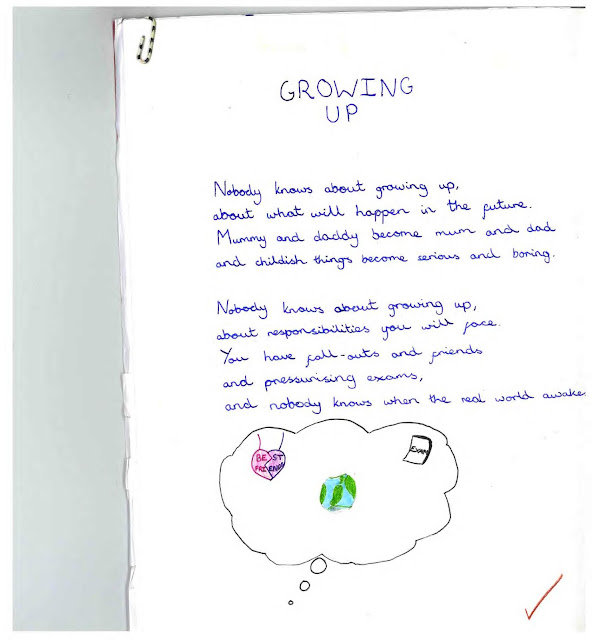 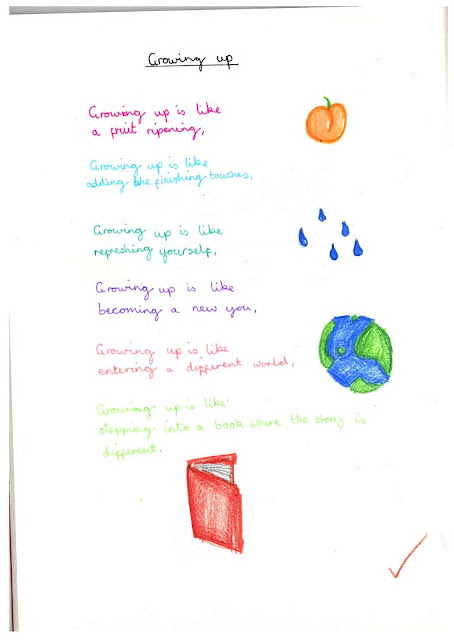 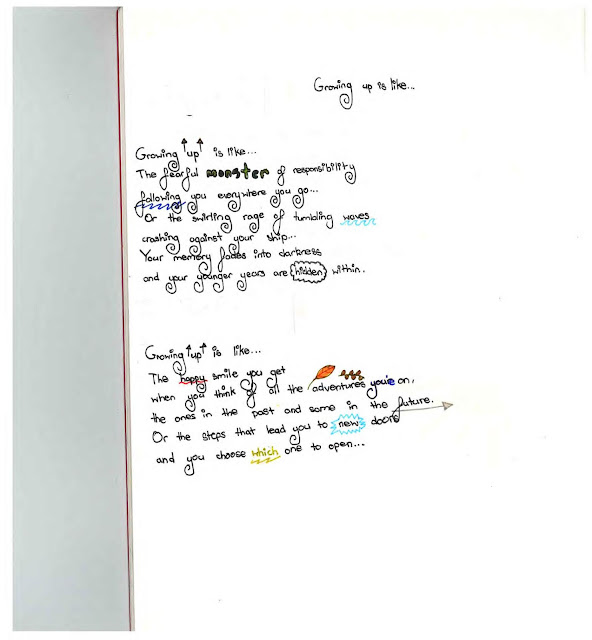 I WANNA BE A BEAR

I wanna be big
and bad and brave
wanna live in a forest
wanna lurk in a cave
wanna have sharp teeth
and lots of hair
I said yeah yeah yeah
I wanna be a bear.

I wanna be big
and brave and bold
wanna curl in a ball
when it gets very cold
wanna lick my lips
and give you a scare
I said yeah yeah yeah
I wanna be a bear.

I wanna be furry
I wanna be funny
wanna prowl wanna growl
wanna guzzle that honey
wanna snooze all winter
in a cosy little lair
I said yeah yeah yeah
I wanna be a bear.

I wanna be polar
or grizzly or sun
wanna dance wanna prance
wanna have a little fun
I might look cute
but please beware
because
yeah yeah yeah
I wanna be a BEAR! 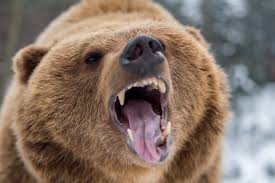