I wade into debate between Michael Rosen and Gilad Atzmon

It is not especially often that I wade into political debates on the internet. However, I do have two degrees in Philosophy, so perhaps now would be a good time to put them to use. What follows concerns an attack on Michael Rosen, poet and Leftist, by Gilad Atzmon. For those who don't know, Atzmon is a jazz musician with some pretty incendiary things to say about Jewish identity politics (hint: he doesn't like it). Atzmon recently took Rosen to task for Rosen's proclamations regarding anti-semitism and Corbyn. In what follows, I identify some flawed reasoning in Atzmon's response. I do not aim to settle the argument either way, merely to bring some logical thinking to bear on Atzmon's writing. 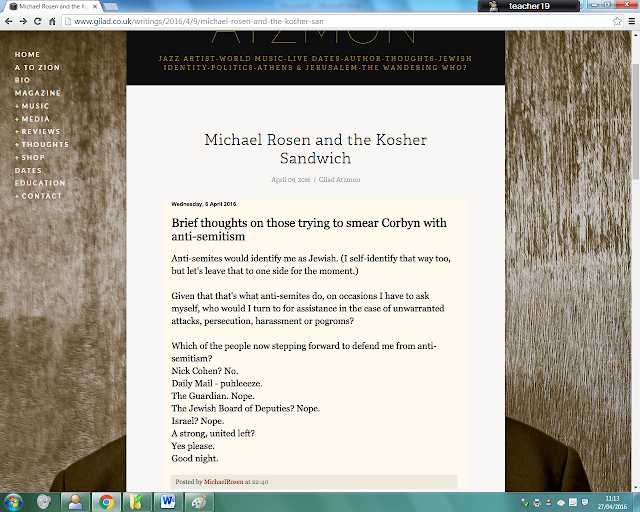 Discourse Analysis By Gilad Atzmon
If you wonder what the role of the Left is in the 21st century, if by mistake you bought into the idea that the Left has something to do with the oppressed, the British poet Michael Rosen will enlighten you. The Left has one true mission: it exists to save the Jews from the next pogrom.
Earlier this week Rosen published a short text regarding‘Corbyn and antisemitism.’ According to Rosen, anti Semites will identify him as Jewish, then in the same line, he writes that he “self-identif[ies] that way too.”  So according to Rosen, the anti Semites are actually correct in identifying Rosen as what he is, that is, a Jew.
But Rosen then claims that those who identify him as what he declares himself to be are anti Semites. I wonder, since Rosen identifies himself as a Jew, how does he know that he isn’t himself an anti Semite? Are there some criteria?
Rosen’s Jewishness is an odd entitlement. He is entitled to identify as a Jew while the rest of us are advised that identifying him as such turns us into ‘hate mongers.’
In my writing I delve into Jewish Pre TSD. Jews are often tormented by a phantasmic traumatic event set in the future. No one exemplifies this  mental condition better than the Jewish poet. “I have to ask myself, who would I turn to for assistance in the case of unwarranted attacks, persecution, harassment or pogroms?” What persecution, what pogroms, Mr. Rosen? You are one of Britain most beloved children’s poets. You are not a Syrian refugee, no one calls to kick you out of the country.  You are not the oppressed. Why do you feel the need to prepare for a pogrom? Is it guilt on your part? Are you hiding something?
Let me tell you, Mr. Rosen, none of my Jewish friends are afraid of pogroms or “unwarranted attacks.” In the eyes of the so called ‘anti Semites’ I should be seen as a Jew, my kids are also ethnically Jewish and yet, the fear that you describe in your statement is totally foreign to us. We are free of fear. We enjoy our lives, we listen to music, we love each other and pray for peace. What we don’t do is imagine the next pogrom. Is it because we do not identify politically as Jews?
Once Rosen has established his angst over a phantasmic terror event, he is ready to tell us what the Left is really about.
“Which of the people now stepping forward to defend me from anti-Semitism?” Rosen asks and his answer is unequivocal:
“A strong, united left”
To Rosen the Left is primarily a Jewish shelter. If you wonder why Jeremy Corbyn has dedicated himself to bowing to Jewish pressure, Rosen basically provides the answer. Corbyn is a tired squashed piece of smoked salmon stranded in a cream cheese bagel. Jewish lobbies push him from every possible direction. But the cheesy Jewish radical left, the ‘Rosens’ are there to save him. They deliver the kosher fig leaf that already transformed the Labour into the new ADL.
In my worst dreams I didn’t imagine that Jeremy Corbyn (whom I supported last summer) would be so idiotic as to march into this trap. The British Left will not recover from this disaster anytime soon.

Here are some of the logical flaws in Atzmon's response:


In the interests of openness, here is Atzmon's response on Twitter:

Soshua Jeigal‏@joshuaseigal
@GiladAtzmon @MichaelRosenYes took it off. That's the problem with internet debate, sometimes we shoot from the hip
Posted by Joshua Seigal at 03:36