Poems About the Kindertransport

I recently worked with a group of Year 9 students, writing poems about the Holocaust. In particular, we wrote poems about the Kindertransport, which was an organised effort to rescue Jewish children from the Nazis. In most cases the children never saw their parents again. The poems produced by my students were phenomenal in their empathy and creativity. Here is a fantastic selection of them.

But I’m a bit confused, because all I want is my home.
My home isn’t two meals a day,
Or a big house
My home is my mum’s kisses,
My dad’s hugs,
My brother’s laughter
Love warming every heart

I’m leaving my only home

There’s No One There to Hold Your Hand by Zoyah

There’s no one there to hold your hand
or hug you so you forget the pain
because when you’re older you understand
you’ll never see your family again.

And here I stand in the billowing smoke
a single bag clutched in my hand
farewells and tears already done
it’s time to finally leave this land.

And yet the younger ones on the platform
scream and shriek and laugh with their games
they think this is a holiday
that one day they’ll come back again.

Because there’s no one there to hold your hand
or hug you so you forget the pain
because when you’re older you understand
you’ll never see your family again.

A New Beginning by Sumaiya

A new beginning, another end
I fill my suitcase with memories
From a picture of me and my family
To the book my mum used to read to me
I take another glance of my empty room
Never has something so empty meant so much to me
To have to leave this all behind
My little paradise

Maybe it was my destiny
To leave the ones I love
To have to board the train
And be several miles apart
At least I will be safe
I thought
But my parents will still stay at home
A tear rolls down my cheek
As I think of what the future holds
A new beginning, another end.

I Am Strong by Raeesah

I am strong
I am loved
I know who I am
But do I?

They’ve taken everything from me
My mother, my father, even my name
3150, that’s me
Repeat the words I tell myself

I am strong
I am loved
I won’t back down

I am strong
I am loved

I open my eyes to the lush green fields
My brother asks me “where are we?”
“Home” I tell him

I will be strong


I will be loved 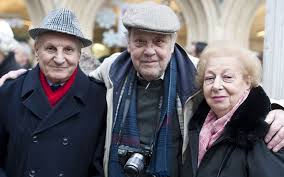 When I was doing my MA at Goldsmiths, one of our mentors, the poet Jacob Sam-La Rose, encouraged us to invent our own poetic forms. This is an example of my poetic form, the 'square poem'. Here are the rules:

It is very hard to get a half way decent poem out of this, but that doesn't mean you can't try. Here is my model example:

Do you think you can do a square poem? If you write one in the comments section of this blog post, I will choose the best one and send you a free copy of my new book - I Don't Like Poetry.

A STATEMENT OF BELIEF

Challenge: write your own Statement of Belief

The Sandwich by Joshua Seigal

My mum made me a sandwich
for the school trip.
She wrapped it up neatly
and left it in the fridge
with a picture of a heart
and a little smiley face.

At lunchtime our teacher said
we could go to the café.
I love my mum, but I like
chicken more than egg
so I bought a chicken sandwich
and threw my mum’s one in the bin.

“How was the museum?”
asked mum when I got home.
“And how was the egg sandwich?”
“Yeah, good thanks” I replied.
So she gave me a kiss
and I went up to my room

and I lay down on my bed,
thinking about chickens and eggs.

MORE POETRY SUCCESS FOR MY STUDENTS

I was delighted to receive the following email, from a teacher with whom I recently worked:


"Good morning Joshua and merry first Christmas month! This is Miss Carter who emailed you about my class entering a Christmas poetry competition with poems inspired by The Day the Poet Came and by your visit to the school.  I have wonderful news!  George was a runner up.  This is an enormous achievement!  It was a national competition so must have had hundreds (thousands?) or entries.  We are all incredibly proud of George!  It has meant the world to him, as it has the rest of the class.  You have really made a difference and they will remember this forever!"

Receiving this kind of news really makes my job worthwhile. Here is a fantastic selection of verses from the amazing poets in Miss Carter's class, which I'm honoured to be able to share on my blog. (The poems were inspired by my poem 'The Day The Poet Came', in my book I Don't Like Poetry.)

Crazy Christmas by George, 9, The Lyceum
The Christmas jumper really jumped.
the mince pies went to Spain.
the Christmas trees grew legs and danced.
the elf fell down the drain.
the raindeer bumped into a star.
the day that Santa came.


Christmas Odds by Imogen, 8, The Lyceum
The presents walked.
The snow grew a brain.
The stockings gasped.
The bauble took a train.
The Christmas pudding swam.
The elves got put into chains.
Things happened that blew our brains
the day that Santa came.

Magic and Mayhem and Christmas by Isabella, 8, The Lyceum
The snowflake grew an ear.
The Christmas tree turned into a sphere.
I drank a beer (naughty!)
And I saw a deer.
But I'll never fear (I'll cal Rudolf).
Merry Christmas and a happy new year!

Magic and mayhem at Christmas by Emily, 9, The Lyceum
The tree burped and slurped.
The mince pies got the blame.
The bauble balls grew legs.
The reindeer was lame.
The snowflake danced around.
That's what happened when Santa came.

My Crazy Christmas by Louie, 8, The Lyceum
The elf fell down the drain.
Rudolf flew to Spain.
The Christmas tree was insane.
and the star was a goat.
The day that Santa came!

The crazy Xmas Wonderland by Charlotte, 8, The Lyceum
The tree ran away.
The turkey was steak
The pine needles turned
into a lake.
Mrs Claude's name was Summer
The fire began to shake.
The day that Santa came.

The Magic Christmas by Sienna, 8, The Lyceum
The presents danced the walz.
The mince pies went insane.
Christmas trees grew plats.
The star walked in pain.
The elfs ears disappeared.
The turkey was paid.
The day that Santa came.

Magic and Mayhem at Christmas by Jean-Paul, 10, The Lyceum
The raindeer flew as slow as a snail.
The elf turned into a whale.
The diamond watch went on sale.
The day Santa came.

Christmas Eve Mayhem by Luca, 8, The Lyceum
A mince pie wore a tie.
The Christmas tree ate Wayne Rooney.
Mrs Clause was a lion.
My cousin, an elf, turned into a bee.
Red, shiny ball-balls flew.
Rudolf supports Chelsea.
This all happened on Christmas Eve.