POEMS ABOUT UNITY WITH YEAR 10

I recently worked with a Year 10 RE class to produce poems about unity. I shared the following three pieces: 'There is Power in a Union' by Billy Bragg, 'People Need People' by Benjamin Zephaniah and 'I am a Rock' by Simon and Garfunkel.

Alone, separate, isolated,
it doesn’t bother me.
No one’s opinions,
no unnecessary suggestion,
no one can hurt me
if I’m alone.

A few stares,
some may talk,
gossip, sneer and tease.
I don’t know them,
they don’t know me.
I like it that way.
No one can hurt me
if I’m alone.

Some may think I’m weird,
others may persuade me to mix,
to have fun, to socialise.
I do all that my own way.
No one understands me,
but no one can hurt me
if I’m alone.

I like what I do,
it’s who I am.
I am special and different
and no matter what anyone says
no one can hurt me
if I’m alone.

If we stand together
We’d become stronger
If we bond together
Our faith would contain power
Unity if the key
Don’t break apart
Never go away
Because unity is the key
I would help you
I would comfort you
I would be there for you
Only if
And I ask only for one wish to be true
That wish being for you to stay
Stay because I say
That unity is the key
Posted by Joshua Seigal at 05:05

Baa Baa
Pink sheep
Have you any bread?
Yes sir, yes sir
On my head.

Baa Baa
Red sheep
Have you any socks?
Yes sir, yes sir
In my box.

Baa Baa
Blue sheep
Have you any toes?
Yes sir, yes sir
Up my nose.

Baa Baa
Green sheep
Have you any cake?
No I don’t
For goodness sake!

I wrote the above poem, basically, because I was really bored. Sing it to young kids; they will delight in how ridiculous you are, and feel indignant at how your are making such rookie errors. Discuss what other alternative renderings of this famous song you can come up with. Write a few examples of the board, then they can have a go on their own or in pairs. Enjoy!

Nobody knows this
but under my skin
there's a rainbow.

Shh! don't tell anyone
but inside my mough
there's a snake's tongue.

I've never mentioned this
but my eyes are balls
of glowing lava...

what weird and wonderful secrets do you have? write a poem in which you reveal your secrets, using the above examples as models. For scaffolding, you could begin each line with 'Nobody knows this, but...', or something similar. The goal here is imagination and playfulness. Enjoy!

You are invited to:
The Teddy Bear’s Picnic.

Where:
Deep in the woods

Time:
The stroke of midnight

Dress code:
Nothing tough or chewy


An invitation is, of course, a form of message. Write a poem in the form of an invitation to a weird, wonderful party. Have a think about who is having that party. It could be anyone or anything - animals, pirates, teachers, monsters, dinosaurs, etc. You can use the template above to write your poem, or you can make up one of your own.

A Classroom Speaks
The window says “welcome”,
the door says “come in”.
The whistle says “quiet”,
the book says “begin”.
The paper says "write"
and the snack says “yum yum”.
The carpet is sighing
“please sit on your bum”.
The test says “no way”
but the sticker says “try”.
The pencil says “greetings”,
the rubber “goodbye”.
The paint says “clear up”
and the sink says “splish splosh”.
The glue yells “yahoo!”
but the apron shouts “wash!”.
The clock says “it’s over”,
the bell bellows “dash!”
and that is the end of
the big classroom bash. 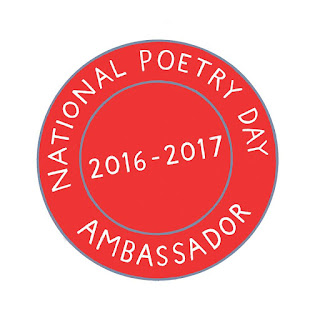 I am delighted to be an official National Poetry Day Ambassador for 2016! In the run up to the day, on 6th October, I shall be periodically posting some workshop ideas on this blog. Here is a very simple idea aimed at KS1 classes. The idea is inspired by Michael Rosen's 'Down Behind The Dustbin' poems. Imagine the telephone is ringing. Who might be leaving a message, and what might they be saying?

Ring, Ring!
My name is Mike.
Help me out,
I’ve lost my bike!

Ring, Ring!
My name is Fred.
I’ve got an apple
On my head!

Ring, Ring!
My name is Will.
I’m running round,
I can’t keep still!

The idea here is to explore rhyme and play with ideas. This could either be done with shared writing on the board, or individually or in pairs. Prizes could be awarded for the funniest idea. 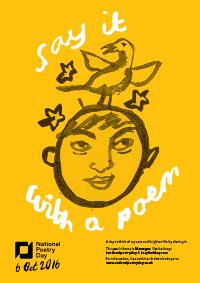 New Book Is 'Book Of The Week'

This week saw the release of my first book with a major publisher - I Don't Like Poetry. (That's the title of the book, not a bald statement of fact.) I am regretting now that I didn't add 'I love it' as a subtitle, but hey ho - I will try to get Bloomsbury to rectify this when the book is reprinted.

I am very excited to have my words (dis)grace the shelves of major bookshops, and hopefully the bedrooms, bathrooms, attics and sheds of many homes. I am also delighted to say that the magazine The Week Junior (not 'The Weak Junior'; that would be a very different type of magazine) have made my book 'book of the week': 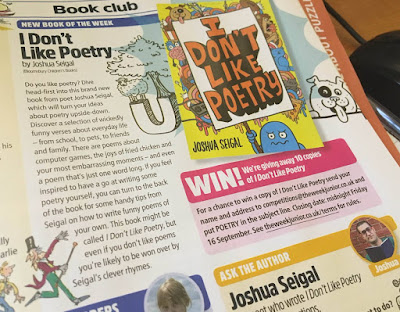 very exciting. Also, I recently went into the Bloomsbury offices to record some videos to promote the book. We recorded five in total, and are strategically staggering their release. Here are two that have been released so far:

Back To School? Roll on Christmas!

What I Want for Christmas

Last year I got a bicycle.
I rode it for a while.
The year before I got a phone
that soon went out of style.
My friends are getting football shirts
but I’m less orthodox:
what I want for Christmas
is a lovely pair of socks...

I used to have a Batman suit
but I grew out of it,
and then I got a PS4
but that’s a pile of... rubbish.
What I’ve set my heart of now,
it won’t be hard to finance;
what I want for Christmas
is a pair of mighty fine pants.

Shiny ones, bold ones,
silver ones and gold ones,
ruby ones, diamond ones,
Toi! Let! Seats!

Flash ones, cool ones,
sparkly ones and jewelled ones,
like they have at school ones
Toi! Let! Seats!

You may well think I’m dumb
but it’s where I put my bum,
so let me have some fun
with a brand
new
toi
let
seeeeeaaaaat!

Earlier this week I took part in the Edinburgh Book Festival. I performed for large groups of schoolchildren, and signed copies of my new book. I was delighted to be back in Edinburgh after having taken shows up there in 2012 and 2013 for the Fringe, and I also managed to catch the last day of the Fringe this year, performing a set at Comedy Club 4 Kids and catching a show by the fantastic (albeit very weird) Spencer Jones.

After my Book Festival performance I caught a train to Aberdeen to take part in the Booked! Festival, an outreach programme run by the Edinburgh Book Festival which involves taking the festival experience to different parts of Scotland. It was in Aberdeen that I had my first experience of performing poetry for a group of severely disabled children.

There were about ten children in the group, from Woodlands ASN (Additional Support Needs) School, many of whom were in wheelchairs. Each child had a support worker with them, and most couldn't talk. I was nervous about this, since audience participation is usually a crucial part of my act. I was also nervous generally; I had no idea how my performance would be received, and I had pretty much no experience working with children with these kinds of disabilities.

I decided to do the same act that I do day in day out at schools, and that I did the day before in Edinburgh. The audience participation worked well: there were a couple of very vocal, enthused children, and other children had their carers interact on their behalf. I found that the pieces that worked best were the rhythmical ones, and the ones with strong, distinct choruses.

Why am I writing this? Because it is very easy to see such people and to 'write them off' in our minds, to tell ourselves that they are incapable of enjoying or experiencing things as we do, and to just kind of leave them to it. I myself have unconsciously been guilty of this type of thinking. It sounds ridiculously saccharine, but to see the smiles on their faces and in their eyes when they were listening to my poems was really special, and I am grateful to have been given an opportunity to share my work with them. I hope to do so again in the future.
Posted by Joshua Seigal at 04:07