I woke up in an unknown city. Probably in America. Could have been New York. People were coming and going, bustling all around me. I was in the middle of the street, in dirty clothes. My limbs were stiff. Not the kind of stiffness that comes from simple exhaustion – no, I had some kind of disease. A disease which made my arms and legs stiff, so that I had to drag my body around painfully. People caught my eye briefly, but quickly turned away again in disgust. I wandered up to people, pleading for something, although I did not know what. I realised suddenly that I did not know the language, that I did not know how to communicate with these people. I tried to communicate using only my eyes: “please help me, somebody. I don’t know how I got here.” It was at this point that I noticed people coming and going through a door to a fancy looking restaurant. The restaurant was called ‘Joshua Seigal’s’. My restaurant? How and when did I open a restaurant in this foreign city? Was it even ‘my’ restaurant anyway, or did someone else have the same name as me, complete with idiosyncratic spelling? I went up to the restaurant, and tried to peer inside the window. I saw all kinds of people in there: families with small children, two women in hijabs chatting amiably, an avuncular old man hunched over a newspaper. I tried to make out what the menu of this restaurant, my restaurant, was, but I couldn’t read it properly. All I could tell was that it was some kind of burger joint, which made sense given my surroundings. ‘Joshua Seigals’ was written in what looked like mock handwriting, as though someone had attempted to give the place a homely, ‘genuine’ feel. I knocked on the door, and a burly guy answered. I tried to explain to him that this was my restaurant, that I was Joshua Seigal, but I couldn’t get the words out. I tried gesticulating, but my limbs were too stiff and the gestures too painful. I don’t know what happened after that.

Last week I worked at St Joseph's RC Primary in Covent Garden. In Year 4 we wrote our own versions of Kit Wright's famous 'Magic Box' poem. I told the class they could choose any type of box they wanted - the poet below chose 'The Sad Box'. Here is her fantastic poem: 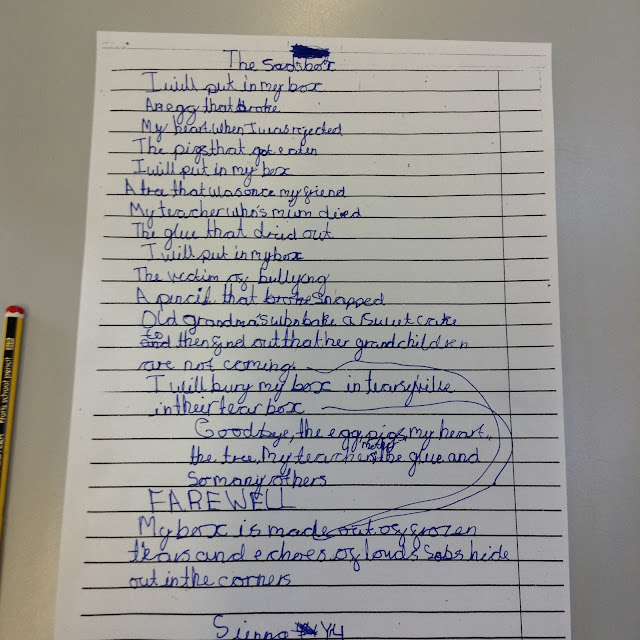