IN WHICH I WRITE AND SING A SONG

One of the main points of sadness in my life is that I lack any proper musical ability. This makes me sorrowful because there is nonetheless a deep sense in which I am a musician: I carry songs around within me in my head wherever I go. These 'songs' are original compositions, it's just that I lack the ability to play a musical instrument or sing sufficiently well to enable most of these tunes to have an existence in the real world, outside of my head. I also never learnt to read music, and the music lessons I had at school, based as they were on classical music and a pedagogy that erred on the side of the highly traditional, left me feeling that music wasn't for me, that I was musically thick. I did learn to play the bass guitar as a teenager, and to strum a few chords on the guitar too, and actually ended up writing probably about twenty songs for a punk band I was in at the time, which you can listen to here. I also wrote a few solo songs and did a few covers under the name Yabyelle, which you can check out here. (Don't ask where the name came from; it is a secret I can never reveal.) But still: I have so much more music in me than is conveyed there, but which I am unable to release. Partly this is because I can't sing very well. Anyway, I wrote a song earlier this week. I started with the lyrics, and then decided to put them to a tune. After having done this, I decided to record myself performing the song. The inspiration I had in mind was Ewan MacColl, who was famous for his acapella recordings of old folk songs. Here is my effort:

I hope I haven't embarrassed myself too much by sharing this video. If by some chance you do enjoy the video, it would mean the world if you could click 'Like'. Here are the lyrics:

So the sky is enshrouded with ripples of doubt

and this sink has a blockage I cannot get out

I will only love you more.

So the words they come easy but suddenly stop

and the ceiling is creaking and threatens to drop

and that wardrobe of costumes is merely a prop

Through the pain and the strain

and the ache of the heart

Through the thoughts that get caught

as our fort falls apart

Through the churning that yearns

for the finish to start

So the tea on the table’s abandoned and cold

and the devil once jailed has now been paroled

So the shadows that creep, they seep in through the cracks

and the money we earned’s now demanded for tax

I just know that this snowstorm will not hold us back

Through the heat and the sleet

and beat of the drums

Though the ending seems pending

and I’ll go with the flow

for I know you’re the one

and I’ll only love you more

Yes I’ll only love you more

My feet got blisters.

I kept tripping over

and ended up snapping

one of the heels.

My big sister shouted at me.

I try to walk

in someone else’s shoes.

....In all seriousness, Empahy Day is a wonderful initiative from the Empathy Lab. It happens every year in June, and is well worth checking out. And please, despite the difficulty, do continue trying to walk in someone else's shoes.

The vase is on the floor again.

The bed is in a state.

The cushions have been torn apart.

The television’s on its side,

its wires all askew.

and there’s nothing I can do.

The picture frames are cracked and bust.

The rug has been demolished.

The living room is upside down;

all calm has been abolished.

My books are torn. I feel forlorn.

My mood is rather flat.

I didn’t know all this would happen

when I got a cat. 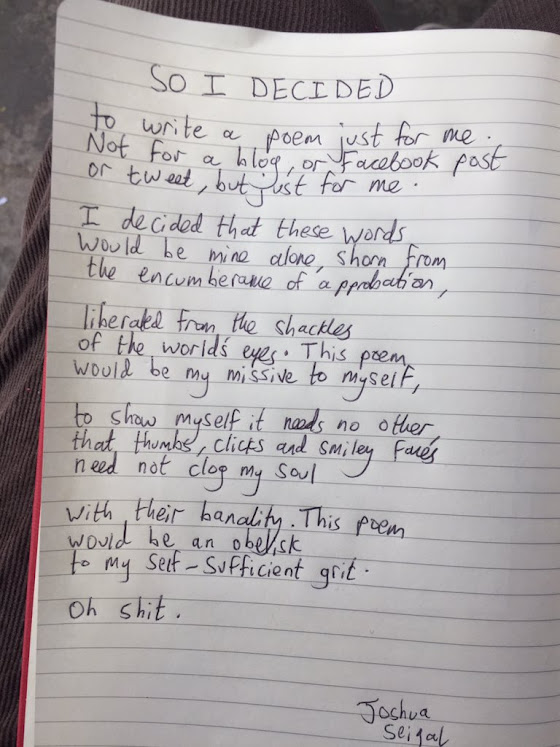