LOCKDOWN POEM - 'NOT ALL BAD'


More time at home with my beautiful wife
More time to ponder and contemplate life
I may speak for nobody other than me
But it’s not all bad, you see.


More time to muse upon what really matters
More time away from the shouting and chatter
Some days it feels like I’m in the clink
But it’s not all bad, I think.


More time to listen to favourite bands
More time to accept that it’s out of my hands
Strength and resilience starting to grow
It’s not all bad, you know.


More time for cooking, more time to read
Less time for the things that I don’t really need
I’m not saying it’s great, not for one second
But it’s not all bad, I reckon

I recently set a challenge, which was for children to write a poem based on my piece 'A Classroom Speaks', which is very popular during school visits, and which is hopefully forthcoming in my next book. The poem is on my website, and can be viewed here. Based on the ideas in this poem, I asked children to think of a place, and all the objects contained therein. I then asked them to imagine what these objects might say, if they could talk! I left the rest of the activity up to their imagination.

I am delighted to say that some teachers from Hadley Learning Community Primary School in Telford got in touch, with some amazing examples of their students' work. It is an honour for me to be able to share some examples on my blog. Check them out! 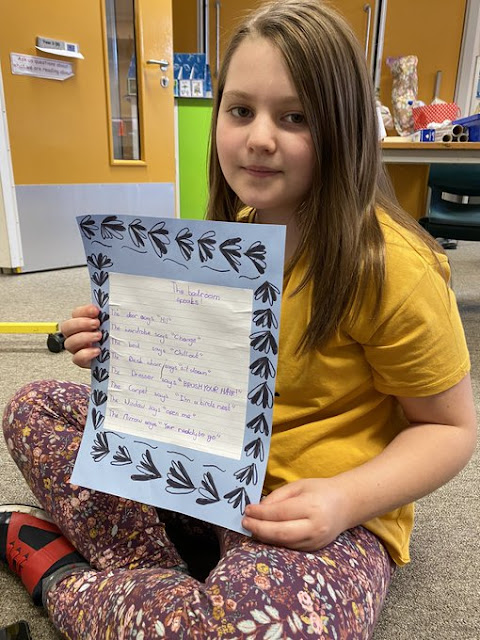 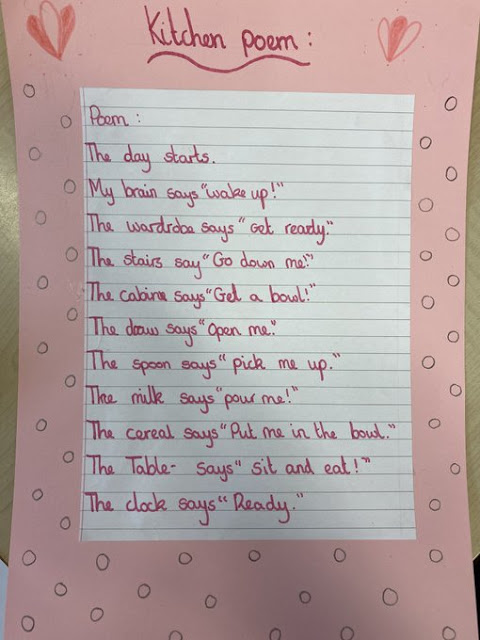 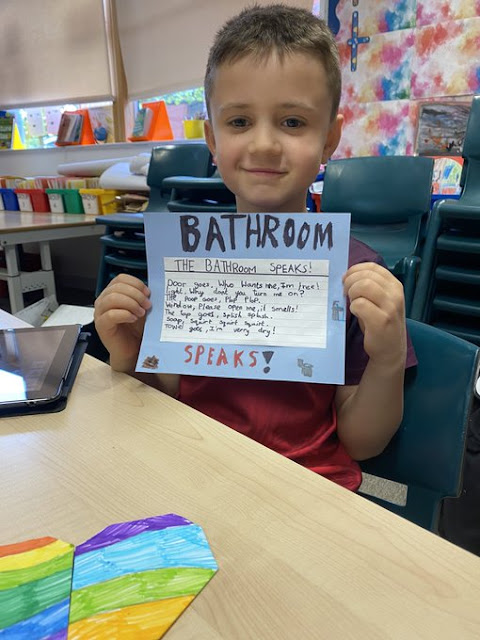 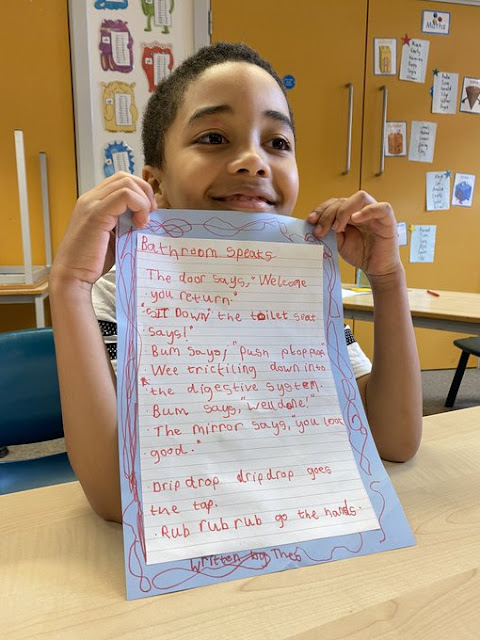 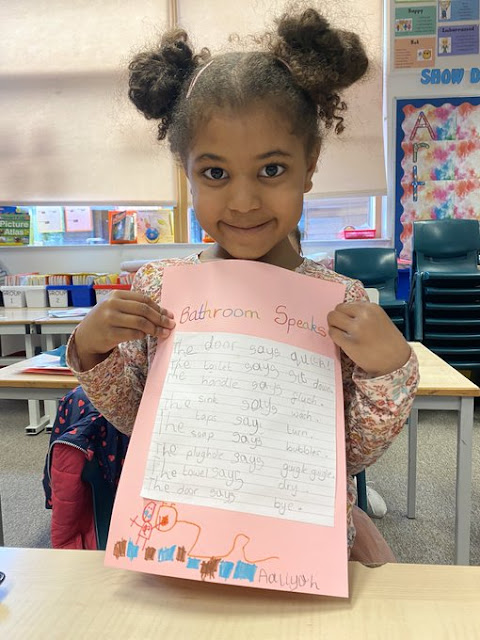 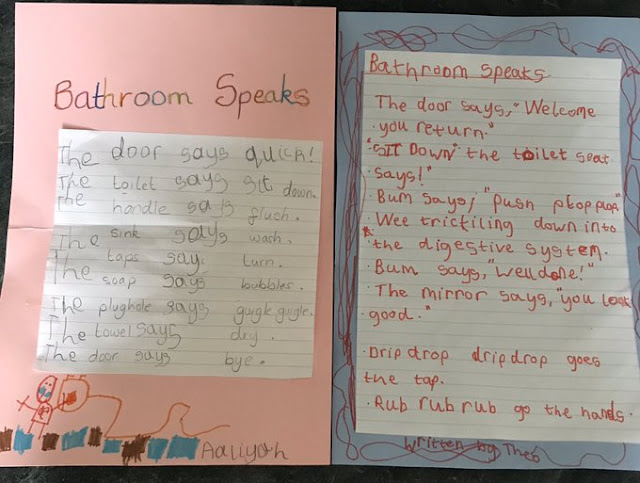 This poem was written in response to a claim made by Donald Tr*mp that bleach might have curative effects on Coronavirus.


You can cast away your clothing
And get naked on the beach
You can stand upon your balcony
And then begin to preach
You can juggle with a pineapple
Or nectarine or peach
But I really must beseech you -
Don’t be drinking fuckin bleach.


Yes I have some simple words for you
I know you are expectant
I want you to be self-aware
And start to be reflectant
So if you think you want to search
For some kind of injectant
I really, really have to say


DON’T USE THAT DISINFECTANT! 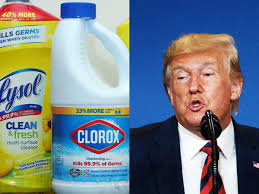 We are the unskilled,
at the other end of the curve from you.
Most of the time you don’t notice us

as we do what we do. Silently stitching
the fragile fabric that holds your life,
we are the unskilled, ghosting through

early mornings and late nights
so you can muse on higher things
in the comfort that you’re accustomed to.

for we are the unskilled.
We grease the axles of your world for you
but kindness, perseverance

and determination too
are not quite deemed to be the same
as having letters after your name.

Yes we are the unskilled,
preparing, cleaning, polishing the board
on which you play your game.

(this poem was written during the 2020 Coronavirus Lockdown. I am delighted to say it has been published over on the fantastic Inspiration In Isolation website. I am also very chuffed to say it was broadcast on BBC 5 Live on 19/05/20)

One of my earliest memories is of going to watch Tottenham with my dad, when I was around five or six. I remember we got beaten 2-0 at home by Blackburn, back when Blackburn were good. I remember the Creme Egg that my dad bought me, and struggling with the fiddly bits of silver foil. I remember asking what would happen if nobody scored a goal, and being confused and even a little bit angry that such a thing as a nil-nil draw was possible. Barring a period of a few years as a punk-obsessed teen, I have been a keen Spurs supporter, and a follower of football in general, ever since.

And yet one of the things I am discovering during the current, indefinite footballing hiatus is how little I really miss football, especially Premier League football, and especially Tottenham.

I don't miss the limp disappointment of defeat, or the fleeting joy of victory.

I don't miss the endless false dawns and the knowledge that, unless Spurs are bought by Kuwait or something, they will ultimately always be unable really to compete.

I don't miss the sense of underachievement that clings to the club like the smell of wet dog.

I don't miss referring to the team as 'we', despite the knowledge that I personally played no part whatsoever in whatever happened on the pitch. Or maybe, if I was at the match, I did play a part by dint of helping fill the club's coffers, in which case why did I bother in the first place?

And I don't miss the cyclical nature of it all; the fact that the same process gets enacted every week, like Samsara, yet never ultimately arriving at any higher purpose. You lose one week? You feel shit, but hey - there is always the next week to get excited about. You win the following week? You feel good, but ultimately, well, so fucking what? What is the purpose of it all? Defeat bleeds into victory, which bleeds into defeat again, and on and on, until the end of the season. Until it all starts up again.

Just as the soul yearns for nirvana, for freedom from the cycle of reincarnation, I am discovering that I can do perfectly well, thank you very much, without football.

When it all starts up again, I'm sure I will watch it. I'm sure I will be unreasonably pissed off when 'we' lose, and momentarily happy when 'we' win. But the whole thing seems to have become shrouded in a fog of futility I never previously knew was there, and I'm not sure whether, for me, that will ever really disappear now I am aware of it.
Posted by Joshua Seigal at 16:03

'NEVER...' FAB POEMS FROM PUPILS AT CHRIST CHURCH AINSWORTH (amongst others)

I recently promoted a new writing idea, based on my poem Never, which you can read here. After having listened to the poem, I challenged children to come up with their own versions. They didn't have to rhyme (although they could if they wanted), but each line should start with 'Never...'. The challenge was then to think of some weird, exotic, crazy things that one should NEVER do. I am delighted to say that many children at Christ Church Ainsworth school decided to give this a go. I am honoured to be able to share their poems here, along with some poems from kids at other schools. Enjoy! (and why not give it a go yourself? It's very fun) 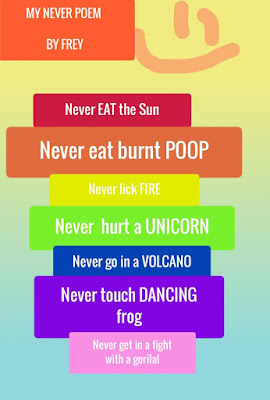 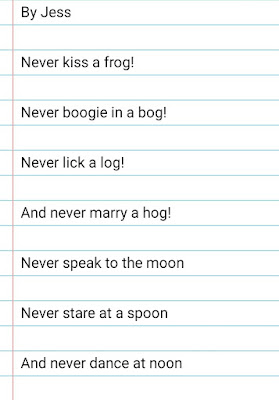 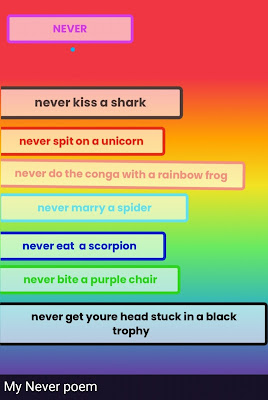 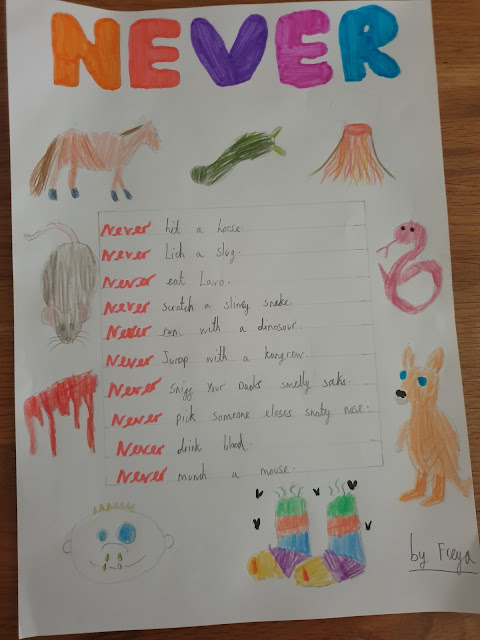 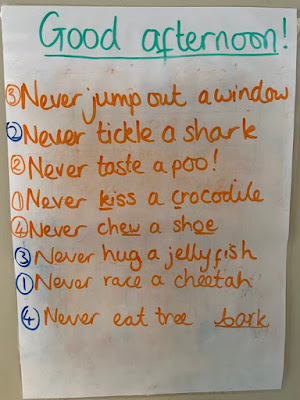 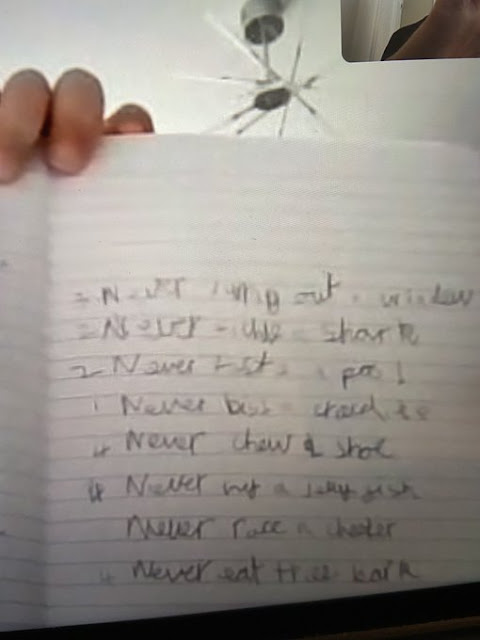 Heart palpitations
At the morning news
Just had my lunch
Is it too early for booze?
Precariously balanced
On the blade of a knife
Hey everybody it’s
Lockdown Life

Try to read a novel
But the words fall flat
New Instagram account
And a picture of the cat
Try to get a handle
But the thoughts run rife
Hear ye! Hear ye!
Lockdown Life

Hands reach out
Is there anybody there?
Writing down these words
But does anybody care?
A bird’s flight forming
In the mind’s small eye
Ain’t nothing there but
Lockdown Life


(THIS POEM HAS NOW BEEN SET TO MUSIC! CHECK IT OUT HERE)

I am very privileged to be teaming up with Love Reading 4 Kids to offer an exciting online poetry workshop. You can watch the video here:


Yesterday Abi (age 10) got in touch with a fantastic poem she had written, based on my workshop. Here is Abi's wonderful poem:

Freedom of the Orange by Abigail Marks aged 10

Orange of wonder and

Orange of the world

Orange of opening the door

Orange of the sunset makes you feel warm

Orange of the ocean

Orange of the sun going behind you

Orange of the tree you fall from.


But it doesn't end there! Abi's mum Ros also gave it a go, proving that poetry can be enjoyed at any age. Here is Ros's fan piece:

Your blossom envelopes me like a blanket of love
White and pink, so delicate are your features.
I am sad when you are blown from me,
Gone for another year.I will wait, for you are my love.

The weather cools with autumns arrival.
I marvel at your beauty once more.
Red, pink, green.  Big, small, round.
You tease me with your beauty.

Each day I watch with bated breath.
Your majestic branches holding your fruit
Like a mother holding a baby.
I watch you grow with ever increasing anticipation.

At last you are ready to leave the protection of your branch.
I catch you in my outstretched hands.
Gently I hold you, as I savour the moment.
My mouth watering with anticipation.

CHOMP!!!I could wait no longer to taste your juiciness.
And then you are gone.