On Saturday I attended the War On Want conference at Rich Mix in Shoreditch with a group of young poets from Holy Family Catholic School. The young poets had the opportunity to participate in workshops on the themes of war, poverty and injustice with pupils from a variety of schools, led by some of the country's leading poet-educators.

I suppose I was there officially to help out and assist with the running of the day, but I ended up participating in one of the workshops. This was a very valuable opportunity for me to address issues that I have typically seen as too 'big' or 'complicated' to be tackled by my pen. The workshop in which I participated was led by Pete The Temp, and one of the exercises involved responding poetically to various images. We were tasked with picking a person in one of the images - we were told nothing of their background - and writing a letter from their point of view. One of the things I came to appreciate was that there is not the dichotomy between 'big, important issues' and 'personal, parochial issues' that I have sometimes taken there to be. The 'big' issues are big precisely because they impact upon the personal to such a large extent; every individual has their stories to tell.

The image I chose was of what I took to be a child soldier. I can't find the exact image, but the one at the bottom of this page, depicting a child soldier from what was then Zaire, comes close. Here is the poem I came up with:

Dear Mum,
this gun in my hand feels good.
I sleep with it at night, feeling
its metal caress me like you
used to do.
It whispers to me, tells
me that I’m a big boy now.
It makes me feel powerful.

Dear mum,
my hands are small and I’m no good
with words.
This rifle will reason
where voices have failed.
I don’t know where you are now
but I’ll blow holes in humanity
to make up for your absence.
The whole world will be motherless
by the time I am done. 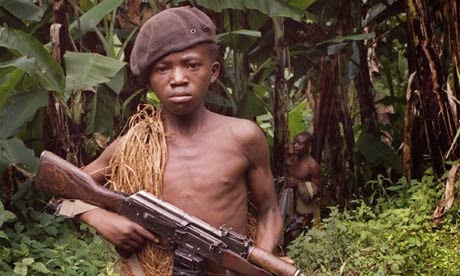